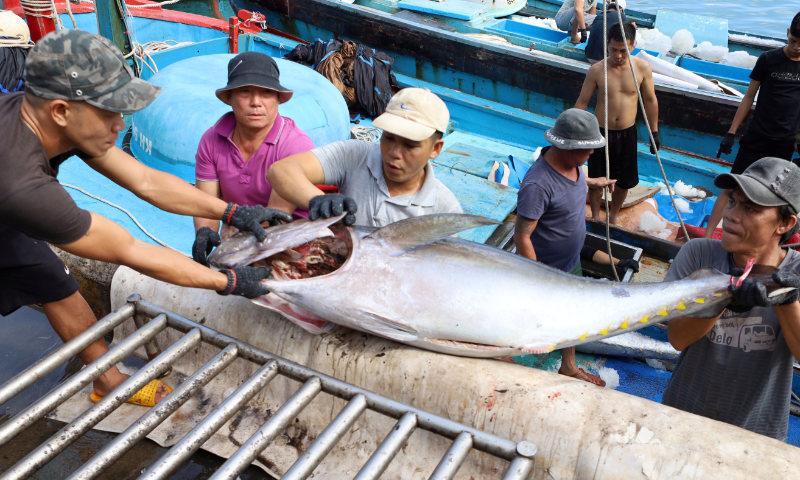 Fishermen carry a tuna in the central province of Khanh Hoa on January 23, 2021. Photo by VnExpress/Xuan Ngoc

The shutdown of seafood factories in southern Vietnam could result in a breakdown of the supply chain and hurt exports, according to a report.

Over 50 percent of factories processing pangasius fish in the Mekong Delta region and to the east of Ho Chi Minh City have closed as of Monday, Vietnam Association of Seafood Exporters and Producers (VASEP) reported.

Other companies have stated that dozens of tons of their fish are dying due to oversized growth within limited space. VASEP estimated the pangasius industry is operating at only 10-20 percent of its full capacity.

They are imposing the stay-at-work model but can only do so temporarily, it added.

They fear they would miss the opportunity to recover manufacturing in September, which is the usual time for factories to buy in large orders and export.

Other seafood companies in Mekong Delta and the central region have shut down because they cannot bear the rising stay-at-work costs and staff shortages. Their inventories have run out.

The first-dose vaccination ratio at seafood processing factories is now at 40-50 percent. VASEP requested inoculation be sped up to prevent a complete breakdown of the supply chain.

It also petitioned for workers in the industry be eligible for lower bank interest rates in loans and a 30 percent discount in electricity bills untill at least the end of the year.

Vietnam’s seafood exports were worth $4.05 billion in the first half of 2021, a year-on-year increase of 12.5 percent, according to General Statistics Office.

Fishermen carry a tuna in the central province of Khanh Hoa on January 23, 2021. Photo by VnExpress/Xuan Ngoc Vietnam’s seafood export turnovers stood at $520 million in August, down 36 percent against the same month last year due to Covid-19 outbreaks. [...]

Drone shots capture the scale and strategies of fishing as locals catch seafood and harvest seaweed in Binh Chau Commune, Quang Ngai Province. Rowing their coracles away from each other to cast a net wide in a V shape, fishermen in the [...]